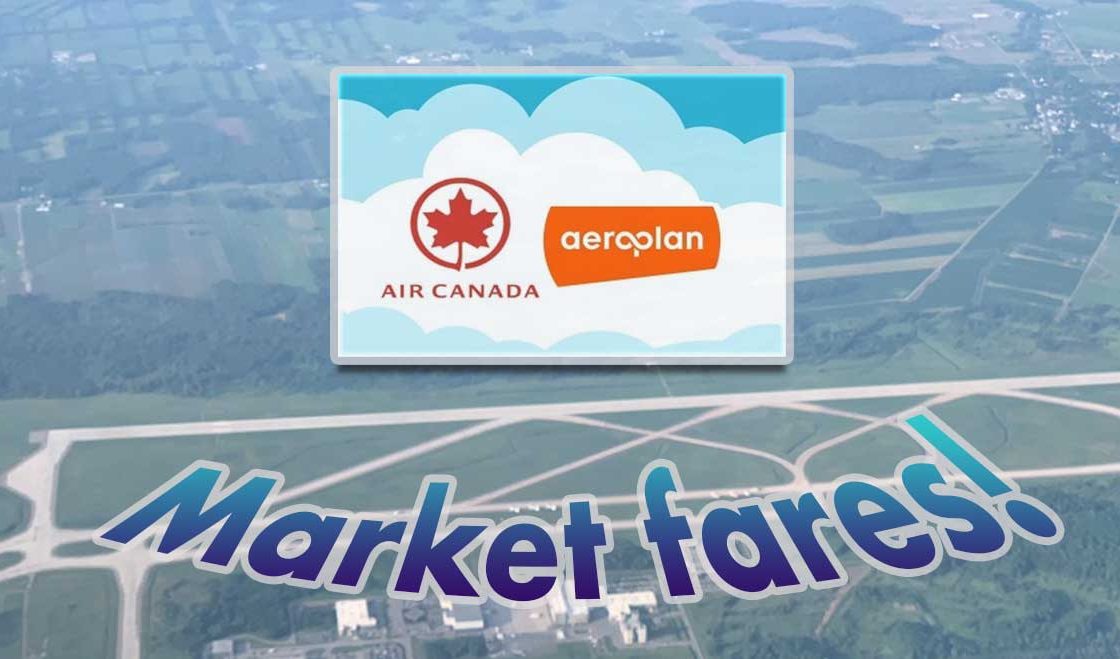 If you’ve used Aeroplan before, you know that when you look for a redemption (especially within Canada) you’ll often be presented with two options:

What is the difference between these two fares and should you ever book a market fare over fixed mileage?

Fixed mileage is exactly what it seems. It’s a fixed amount of aeroplan points that you need to redeem for a specific destination. I’m going to focus primarily on North American redemptions, and specifically ones where you’re on an Air Canada flight, instead of a Star Alliance partner.

For example, for short haul flights (usually to an adjacent province or state) you’ll pay 15,000 points. For a longer trip, it’s 25,000 points. The rules are pretty straight forward and you know exactly how much you will need to save up for.

Market fares are exactly what they sound like. They’re fares that are determined by the current price of the flight. It opens up more available seats, and points are purely based on price. Sometimes a redemption will be lower than the fixed mileage. So… we have a few questions:

Which way should you pay?

It may seem simple that you should always choose the lower point value reward, but as usual, it’s not so simple. Let’s take a look at a short-haul redemption between Vancouver (YVR) and Calgary (YYC). This would cost 15,000 aeroplan points on a short-haul redemption. Here’s a comparison of fixed vs. market vs. cash fare:

You probably notice a few things. The Market fare in this case happens to be higher than the Fixed fare by 7,650 points ( Silver status brings that down to 4,850). However, when you look at the taxes and fees there’s a HUGE gap between the Fixed and Market fare. What’s going on there? Two words: carrier surcharge.

A few years ago when fuel prices spiked, many carriers introduced fuel surcharges to offset the additional cost of fuel. This seemed somewhat fair at the time as the alternative would have been to devalue the points currency with less availability or higher points needed. However, once the fuel prices went down, many carriers decided that they liked that little revenue padding and could use that to keep the points needed low, while still maintaining profitability. They called these carrier surcharges. On this flight the carrier surcharge is a pretty heft $84. That seems high for what’s essentially a 1 hour skybus to Calgary… but I suppose that’s why it’s only 15,000 points. You have to keep everything in perspective.

A lot of people HATE carrier surcharges and see it as a scam for what they FEEL should be a FREE ticket. Personally, I try to avoid them (surcharges, not people), but I also realize that they would have to have found a way to devalue points in another way anyhow. You can’t keep redemptions at 15,000 for decades and expect those points to be worth the same years later.

So which is the better deal?

In this case the fixed taxes are $88.20 more than market taxes, so you have to decide whether it’s worth an extra 4,850 to book a market fare ticket. That’s about a value of 1.8¢ per point. For me that’s pretty decent value especially for an economy ticket, and I’d take the market fare on this route, ESPECIALLY given that there are FAR more flight options when you use the market fare. I chose the same times, but for market flights, there were plenty of flights to choose from. Fixed flights had only one. But you also have to ask yourself one more question: what about just paying cash?

Should you just pay cash?

Market fares seem to be almost perfectly pegged to the pre-tax cost of a basic economy flight at 1¢ / point. It depends on the status that you have as you’ll get various discounts, but it’s a pretty good indicator of the value of your points.

The CASH fare in this case is $206.16 + $83.02 in taxes, whereas the Market Fare is 22,600 (regular) + $72.73. The difference in taxes is likely due to GST or other fees that apply to revenue fares only. They’re close enough to ignore for the most part. Having market fares show up is actually really useful as you can quickly see the TRUE value of the flight. In this case, the real dollar value of the flight. My general rule is that if a market fare is LOWER than the fixed fare, I’ll strongly consider just paying cash and redeeming the cost of the flight through a different loyalty program. I wrote an article on the opportunity cost of points programs you can check out. If we math it up, we get the following:

I don’t know about you, but redeeming aeroplan rewards for 1.1¢ / point is kind of on the low side for me, and I’d strongly consider either looking for another carrier

But, there’s a few caveats

It’s important to note a few things about revenue flights that will help you make your decision. Ask these questions:

Will I get miles from buying the ticket in cash?

You should get both travel miles worth at least 1.5 % plus you MAY get aeroplan miles and status for flying on a cash flight. On a $250 short-haul revenue flight, that probably won’t be more than worth about $10 but you never know. The above flight was priced in Basic Economy, so NO Aeroplan miles would be earned…

Do I need luggage?

Aeroplan redemptions always include a checked bag and seat selection. When you pay cash, you don’t get these perks.

Do I need insurance?

Many credit cards only include trip interription, trip cancellation, and other insurance if you pay for the ENTIRE trip with cash. Paying just the taxes + points often will NOT give you the insurance you need.

Do I need flexibility?

Some revenue fares have STEEP cancellation fees, or are non-refundable. Award redemptions are changeable, with a fee.

In the end, I hope this this article has made things a little more clear and helped you to make a good decision on whether you should do a market fare. Personally, I’ve never found a need to do market fares, although with the restructuring of Aeroplan in Q3 of 2020, we’re likely to see almost ALL domestic flights adopt something like the market fare for flights.