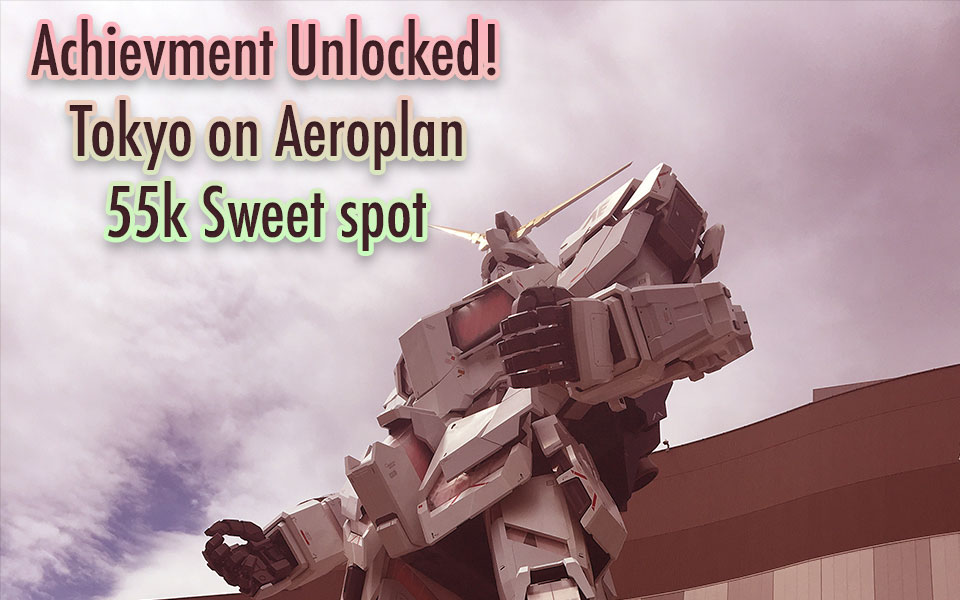 It’s 2021 and, understandably, there’s been little in the way of travel recently. As we all adjust to the new normal, I thought I’d take advantage of wide open availability on airlines along with generous cancellation policies to take advantage of a new Aeroplan sweet spot ever since they transitioned to Aeroplan 2.0. That sweet spot is Vancouver to Japan.

Is the Aeroplan new program better than the old program?

Aeroplan has switched from a zone-based system to a hybrid zone/distance based system. This means the amount of points you need will usually correlate more closely to how far you’re flying. For some destinations, it means you’ll be paying more points. For others, it it means you’ll pay fewer. For most places in Asia, it will cost you the same or more points than before, particularly if you’re flying on Air Canada planes. One notable exception is Japan.

Under Aeroplan’s old rules, the two flights below costed the same amount of points: 75k in economy, 150k in Business. This was great if you were flying from Eastern Canada and wanted to makes stops in Korea, Hong Kong and Vancouver, but it means that for a quick flight to Japan, you’d be overpaying compared to what JAL and ANA offered in their programs… and particularly for economy… you could easily find revenue flights that made using points questionable.

Under old Aeroplan, a 9hr flight to Japan from Vancouver costed the same as a 12h marathon from Toronto, through Korea, China, Hong Kong, Taiwan, and Japan. 75k in Economy (Y), 150k in Business (J).

Aeroplan less competitive than British Airways and ANA for Japan which offered short hops from YVR for as little as 40,000 in economy.

Out with the old, in with the new?

Under the new Aeroplan, flights are based on cumulative distance flown. For hardcore points-collectors, travel bloggers, and credit card churners that thrive on wringing as much personal advantage out of a points program as possible, this change is bitter sweet, but for casual or dare I say, normal travelers who mostly try to travel point to point, this distance -based pricing is more of a level playing field. Overall, this is a win for your average flyer and a loss for those gaming the system.

So what are the details for Japan?

As someone who travels to Japan frequently, I was excited to see that both Tokyo and Osaka are within the new lowest threshold for flights to Asia from Vancouver. Under the new rules, as long as your cumulative miles traveled is lower than 5,000 miles, the price of a one-way ticket is 35k/45k/55k when flying on partner airlines. This puts all of Vancouver AND Seattle‘s direct flights to Japan within range.

What about connecting flights and stopovers?

Since the mileage calculator takes into consideration the distance traveled on each leg, what about internal connections in Japan? Not everyone wants to go to Tokyo, after all. Most travellers end up visiting other major cities (and former capitols) of Osaka, Kobe, and Kyoto. Well, it turns out that, there’s JUST enough mileage to spare to add in other major connecting routes (and stay under the total 5,000 mile limit). Here are a few examples:

That looks great! On a personal note, if you’re splitting time between Tokyo and another major city like Kyoto or Nagoya… strongly consider using the bullet train. It’s faster, more frequent, and more flexible. In 90 minutes you can be in downtown Sendai or Nagoya and you don’t have to spend half your day shlepping you and your luggage to and from airports for a 40 minute flight. However, if you’re not making a stop in Tokyo it’s nice to know that these options are doable from Vancouver. You could also start your trip in Kansai (Osaka, Kyoto, Kobe) and make your way back to Tokyo as well. The choice is yours!

Math time… but there are some quirks

Let’s take this one step further. How far can we actually travel on this 5,000 mile limit? Well… the answer isn’t as straightforward as you might think. Let’s assume take a YVR-HND flight. That uses up 4,708 of your miles. In theory, you have 292 miles left. So, if we put that into http://gcmap.com we get this map.

However, when you plug some of these values into Air Canada’s Engine, it seems to (incorrectly) price Hachijojima HAC as 50K and ONJ as only 35K… So it seems that there are a few glitches to work out still. It’s a shame about HAC as that looks like a nice little add-on for a quick trip to Tokyo.

In any case, these aren’t deal-breakers as travel within Japan is pretty cheap. Flights are available for 8,000 points per segment. When you consider adding a stopover now costs 5,000 on its own with the new rules, it may just be best to ticket these separately anyhow.

A Sweet spot with a few limits

Overall, it’s really great to have a business class flight for only 55k points to Asia. This is a welcome addition to any West Coasters who frequent Japan.

What about trips from Seattle?

Being a family of 4 in Vancouver, it’s nice to have flights available from Seattle as well. This means that I can book two people on a Vancouver-Seattle-Tokyo flight and two on a Vancouver-Tokyo direct flight. But it does limit my final destinations to pretty much Tokyo only. So intra-Japan flights would need to be booked separately to avoid going up to the next points tier. It’s still nice to know you have the option.

In the end, this Japan sweet spot is a nice little perk of the new Aeroplan. While places like Sapporo, Fukuoka, and Okinawa are beyond the 5,000 mile limit, it’s hard to argue the value of a return business class ticket for only 110,000 points.