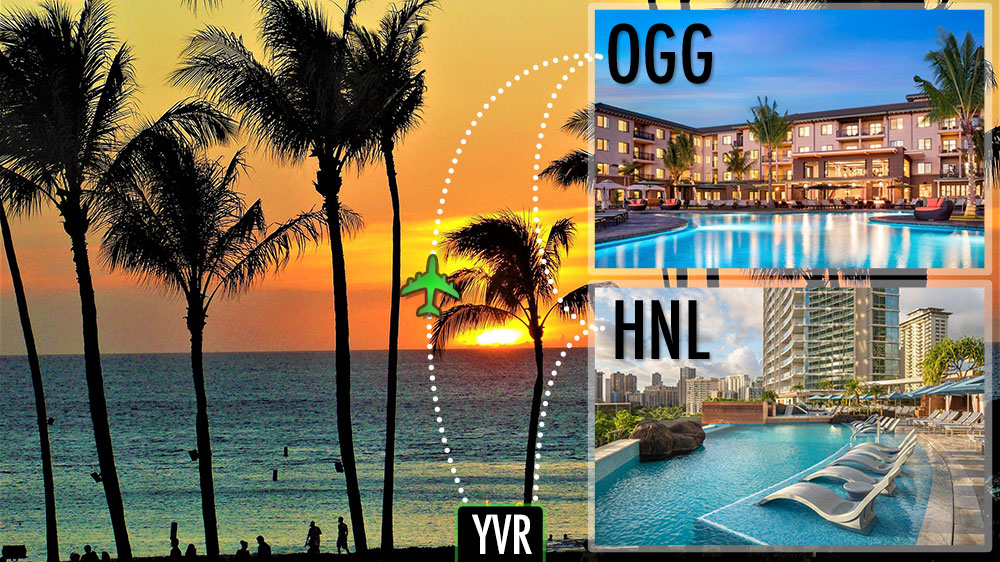 Last year I jumped on the fantastic value of the Marriott Travel Package (RIP). I won’t go over the old package details as it has been outlined pretty clearly on other sites and it’s no longer available. In short, you could convert Marriott points to airline points and get a 7 night stay certificate for a category 5 hotel.

I had my eye on Hawaii for next winter and have never been to Maui, so I had speculatively booked a category 5 hotel in Maui, the Residence Inn by Marriott Maui Wailea. It was increasing to become a category 6 which is 50,000 points / night. Considering I got those points for ~about 300,000 points and they threw in 132,000 United Airline points, it was a great deal.

So, i just needed to arrange the flights. Flights to Hawaii at that time of year usually go between ~$400 on a seat sale to ~$800. Because we needed specific dates and preferred direct flights due to travelling with two elderly parents who generally don’t travel alone due to language limitations we had some strict parameters. Here’s how it broke down.

One of the few advantages of being on the West Coast is using British Airways Avios to fly direct to Hawaii for only 25,000 points return as long as you fly direct, as they charge per segment. This is a fantastic deal, as most airlines charge 40–45,000 points for this route. I tried looking for availability, but in the end we couldn’t find anything that really worked. If we had waited last minute to book the flight we may have been able to find something, but we were looking for specific flights on specific dates…. not the great for using points, unfortunately. We were also looking for 4 flights, preferably together on the same flight.

In the end, due to availability timing, Avios was not going to work.

The Fastest and most Convenient

Vancouver has LOTS of flights to Hawaii. Air Canada and WestJet and other airlines compete on these popular routes and you can’t deny the attraction of flying direct to Hawaii. In addition, the flight times are convenient ( leaving early from Vancouver and late returning from Hawaii, giving you extra time at your destination ). We could either buy the tickets outright ( about $650 ) or use points. What about Aeroplan?

Aeroplan, the good and bad

Aeroplan is a great program. However, for popular routes like these that go on sale quite often, it’s not a great use. Mileage plans know that vacation spots like Hawaii are often used for points,.. as buiness travelers that rack up miles like to use them to go on vacation! So, they increase flights to Hawaii to 45,000 Aeroplan points from North America. Sometimes I wish West and Eastern Canada had different award charts as that’s not a bad deal from, say, New Brunswick or Halifax where Hawaii flights are more expensive, but from Vancouver, it’s a 5–6 hour direct flight. But it is what it is. When you add in that you have to pay taxes and Air Canada tacks on a $69 carrier surcharge just for the privilege of using their airline. It really starts to devalue your points on a questionable redemption. If you’re going to pay $200 for a $650 ticket… it really means those points are worth 1¢ each. Not a great redemption.

Using points that are NOT Avios seemed like a tough pill to swallow, given the great redemption value of Avios… but the convenience and availability is pretty hard to beat. Especially when you see availability show up in the Aeroplan engine for 4 passengers. If only there was a way to reduce costs…

United Miles to the Rescue!

One of the great things about United is that they don’t charge a carrier surcharge. There are also some extra charges like the US International Transportation Tax, which I imagine is only charged by non-American Airlines flying into the US. Here’s the equivalent charges on United. This is is the flight from Vancouver to Hawaii:

The return flight is similar but an even starker difference. Air Canada charges another $34.50 carrier surcharge and an additional $25.20 U.S. International Transportation tax. United, on the other hand, just charges a September 11th Security Fee of $7.50.

What the Actual Costs Were

Overall, booking the EXACT same flight with United Airlines points costs you ~$75 vs. ~$200. When you multiply that by 4 people, it adds up. So, what’s the catch? Well, the only catch is that it’s way easier for Canadians to earn Aeroplan miles than United Miles. Fortunately, that Marriott Travel Package had given me 132,000 miles. After a transfer of some hotel points from Marriott, I topped up the balance to 135,000 points, which is just enough for 6 flight segments. I booked 4 one ways redemptions to Maui for $69.40 in taxes and fees, two return HNL-YVR for $7.50 and finally two flights on Aeroplan for $73.40.

That grand total of $439.44 is a LOT easier of a pill to swallow than $810.84 if I had purchased a round trip using Aeroplan miles. A quick check in the off-season puts these flights at around $600 on average, with the seat sales for $400 and last minute deals for $350… so on first glance this doesn’t seem like a great deal, but our dates were fixed as the hotel reservation can’t be changed and we’re doing an open jaw flight which are more tricky to book. Inter-island flights on Hawaiian Air are pretty cheap, as well. costing only $80 CAD each.

Finish With a bit of Luxury

So, with those flights out of the way, we had everything booked, except for the last two nights as those would be in Honolulu. There were several choices, but since it was only two nights, I figured we’d splurge on a little luxury and stay at the Ritz-Carlton in Waikiki. It was the same price as the Sheraton or Moana Surfrider but newer and more upscale. It’s not right on the beach, but after 1-week in Maui, I’m sure we’ll be ready for something a little different.

The Ritz-Carlton is 60,000 points per night, so it’s a steep cost in terms of points, but if you were to pay out of pocket, you’d be looking at $600 USD per night. After taxes and currency conversion to CAD, that’s a WHOPPING ~$1,860 for two nights. Would I ever pay this much for two nights at a hotel? No. However, this is what points allows you to do, enhance your travel for a relatively low cost. The absolute cheapest place you’ll find anywhere near Waikiki is something like $450 on AirBnB for two nights. Waikiki is not cheap. So even though 120,000 points is a big chunk of points, for two nights, it’s nice to spoil your family with a bit of luxury. As an added bonus, many of the other hotels tend to charge extra for each person more than 2. The Ritz-Carlton… does not.