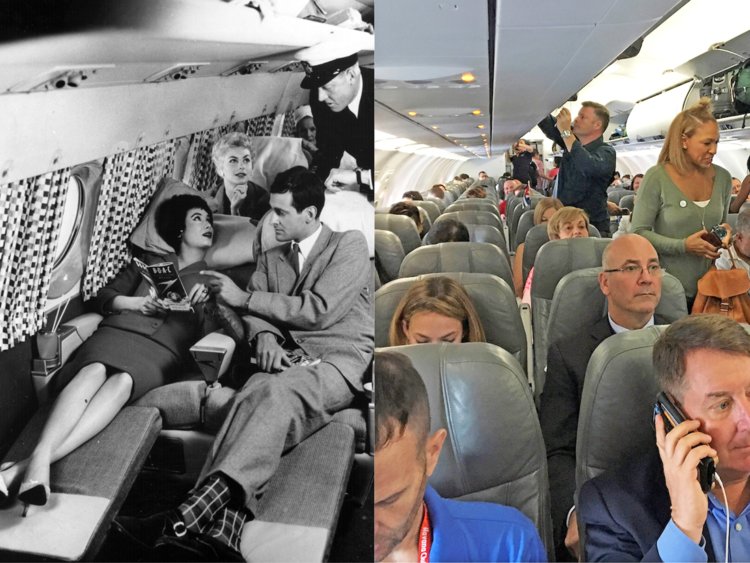 It’s easy to look back and reminisce about the good old days, but how has flying changed? Is flying better or worse than it used to be? Was it REALLY better in the good old days? Let’s dig in to what it’s like to fly today.

Not long ago… just 20 years ago, flying used to be considerably less stressful. Airports had more trust in travellers, there were no 100mL liquid restrictions, and you could even chat with the pilots.

I remember in the mid-nineties asking the ticketing agent if I could accompany my girlfriend to the gate. I didn’t think it was strange to ask and there was no particular reason to do so. I just wanted to spend a little more time with my girlfriend who was moving across the country and say goodbye as she boarded her plane. I received a little hand-written gate-pass note.

In 2000, I remember asking the flight attendant if I could talk to the pilots while flying from Berlin to London. I hung out with the pilot, watching Europe go by as they pointed out features to me like the Rhine river and Amsterdam. It was only when we were prepping for landing that they said I’d have to go back to my seat. I can’t imagine that today.

In addition to easier security checks, we had generous free baggage allowances, less restrictive identity checks, less overbooking, and in general more pleasant workers at the airport. Flying was also more expensive, so I guess the old adage is true. You get what you pay for.

Flying post September 11, 2001 has changed considerably. It wasn’t long before every shred of trust in passengers was eviscerated. It’s very rare for any airport to allow non-ticketed individuals past security with a gate pass. Consider the steps involved in flying today

But is it all bad?

Like all things, change always has two sides. So, let’s flip the coin and see what it lands on.

The reality of flying today

As much as people like to reminisce about the good old days, it isn’t all sunshine and ponies. It’s not long ago that long-distance flights were just a dream. Perhaps that’s one reason Boeing called their 787 the dreamliner. It fulfilled the dreams of people who live in 2nd tier cities to have direct flights to another 2nd-tier city, instead of forcing them through the congested hubs. With the state of air travel what it is, many people want to avoid airports as much as possible. It also lined the pockets of thrifty airlines, who jumped at the opportunity to have a quiet fuel-efficient medium-sized plane.

The dreamliner truly lives up to its name. It allows routes like Vancouver (Canada)–Osaka (Japan). Chengdu (China) – Addis Ababa (Ethiopia), Perth (Australia)–London (UK), and Oakland(USA) – Copenhagen (Denmark). Without a long-distance fuel-sipping medium-sized planes, these routes would be hard to remain viable. The Dreamliner has made it possible and more comfortable.

With longer flights comes more sleeping. And most airlines have business class seats with lie-flat seats. A bed in the sky is just something that most airlines never really focused on until recently. Flights were shorter and business travelers slept in hotels near airports, not a few hours on planes.

Gone are the days when the entertainment on a plane consisted of a movie projected onto a screen in the middle of the cabin. You didn’t get to choose what you wanted to watch, when you wanted to watch… and the planes were louder with tinny little headphones that made it hard to hear.

Today, every seat has its own screen, outlets for laptops, music, and in many cases, internet access. While some decry being connected even on a plane, it’s hard to argue that in-flight-entertainment makes the hours in economy goes much much quicker… especially with kids.

I’d also credit iPads for helping this along as well. Without iPads, I have no doubt that airlines may have found a way to charge for entertainment. For the most part, most airlines realize that it’s better to have a distracted customer than an irritable one.

While there are elements which were nice about flying in the 20th century, it’s hard to argue that while airport have become worse, flying itself has become better. Apart from less legroom in economy, you get much more value out of flying today in what is arguably more comfortable in some ways ( but admittedly worse in others ). I know some will disagree with me on this one, but I prefer to look at the positive.

I’ll still reminisce though about some of the things i miss about flying before September 11th, 2001… but those days, unfortunately, aren’t coming back anytime soon, so why not focus on the positive.