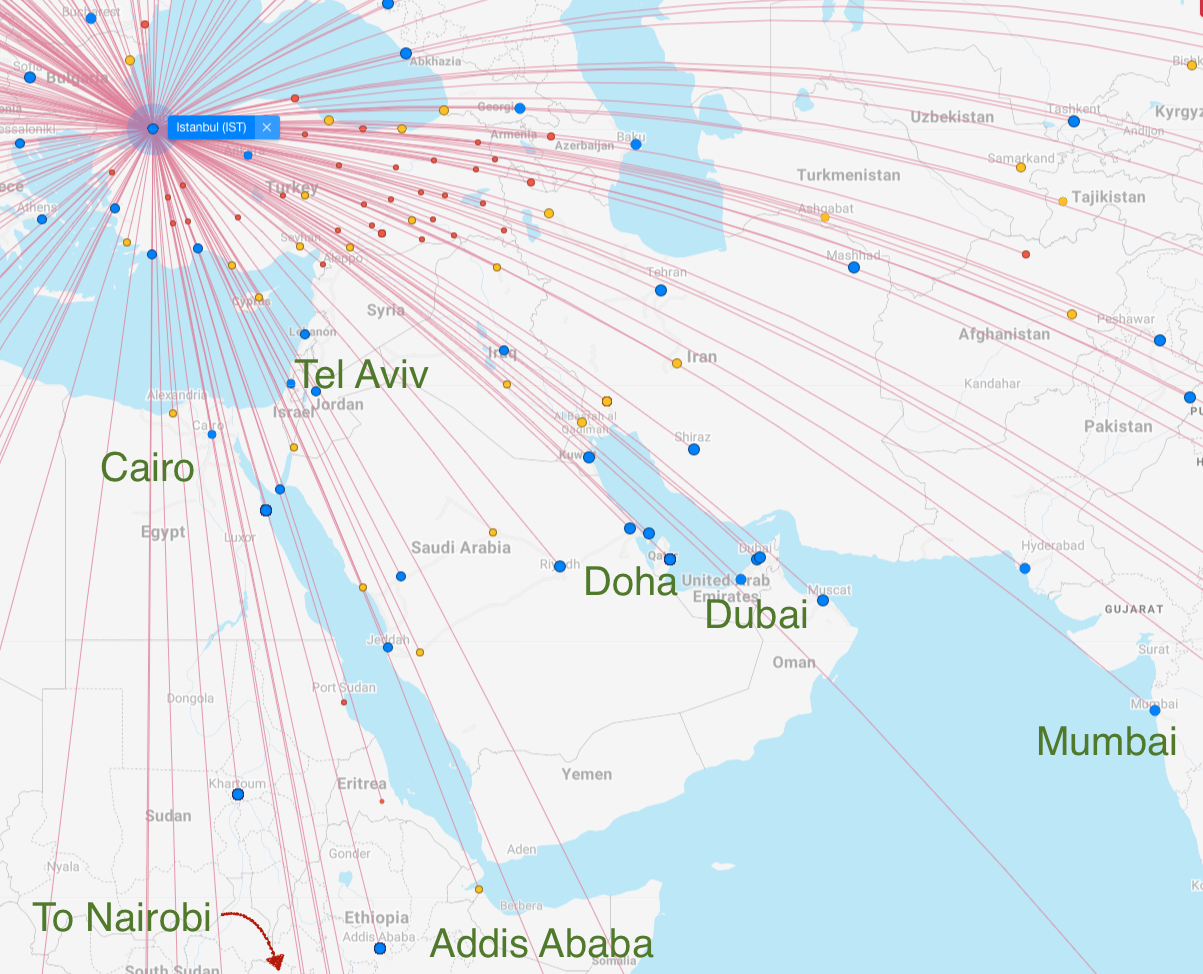 So far we’ve made it to Istanbul on our way to Osaka by making Singapore the turnaround point. Now that we’re in Istanbul, what options do we have to get to Singapore? As it turns out there are some interesting options, including Africa.

Testing the Limits of MPM: Africa

It seems crazy that you could visit 4 continents on one round-trip (North America, Europe, Africa, and Asia), and even crazier to make Africa a stop on the way to Asia from the West Coast of Canada. Thanks to the extensive network of Turkish Airlines, it turns out this is quite possible. Turkish Airlines is based out of Istanbul, and it turns out we do have a few options, although we will be hitting the limits of MPM.

Could I Connect through Kenya?

One option that sounds interesting is Nairobi. Nairobi is the capital of Kenya and seems like an interesting place to spend a day. There are also direct flights from Istanbul. However even if there was a direct flight between Nairobi and Singapore, the distance to include Nairobi (NBO) on the way to Singapore is just too high: 14,779 mi. That puts us more than 1500 miles over the MPM limit of 13,206 miles between Vancouver and Singapore.

As a side point, if we make Nairobi our destination instead of Singapore, we’d have plenty of miles. MPM for YVR-NBO is 14,273 miles, which would allow us some interesting flight options through Asia. For this itinerary, however, it’s not going to work. Additionally, there are no direct flights to Singapore from Nairobi.

This illustrates that despite Star Alliance having a huge flight network, you’re still limited when you combine availability, MPM, and city size. You’ll always have better options getting to major hubs, but out of the way locations can be tricky.

Speaking of hubs, just a few hours north of Nairobi you find the capital of Ethiopia, Addis Ababa, the hub of Ethiopian Airlines. Will that work?

All About Africa’s Addis Ababa

Addis Ababa is the capital of Ethopia and a major hub for Ethiopian Airlines with direct connections to plenty of places in Asia. With the great connection possibilities, would Addis Ababa work?

Unfortunately, it’s not possible to route to Singapore via Addis Ababa as it would exceed MPM by about 700 miles, so unfortunately this pretty much rules out anything in East Africa. In fact, the ONLY way we could include Addis Ababa on the way to Singapore is if we flew direct from Vancouver to Istanbul via London, which would mean considerable carrier surcharges due to flying on Air Canada over the Atlantic.

Can I Consider Cairo? Transfer thru Tel Aviv?

Due to MPM, the possibilities are limited to North Africa and the Middle Eastern hub of Dubai and Tel Aviv. Tel Aviv has plenty of connections and Dubai is also a major hub (not just for Emirates). Although I considered these options, in the end the connections didn’t work out. Cairo and Tel Aviv looked interesting, but have to them for a future trip. Cairo has direct flights from Toronto on Egypt Air, so it’s an interesting option to consider.

Ruling out Africa, off to Asia.

I could have chosen to fly through Tel Aviv, Delhi, Mumbai, Hanoi (Vietnam), or even Dhaka (Pakistan), but I needed a place that is a major Asian hub and easy to get to. Since this would be a layover, it had to be less than 24 hours, so good connections to Singapore was important as well. One city had ideal timing: Bangkok.

In Budapest, I remarked that it was almost the perfect layover. 24 hours long exactly, however the flight to Bangkok may rival that one.

Turkish Airlines has a flight from Istanbul that leaves at 9PM and arrives in Bangkok at 9:50am. Bangkok has four daily flights to Singapore, and of them departs every day at 9:40am! That’s right, it’s our second 24-hour layover on this trip. We also don’t need an extra night in a hotel as we’re on the overnight flight from Turkey.

Essentially, I’ll have the entire day in Bangkok, and just have to make sure to get to the airport early the next morning.

Since Bangkok to Singapore is a short hop, it doesn’t make sense to fly out late that night from Bangkok to arrive later that night in Singapore. Singapore’s an expensive city, so arriving early morning and departing late can make the the best use of time without the extra expense of a hotel room.

And that’s exactly what I plan on doing. In the next article, I’ll talk about how we’ll finally get to Osaka from Singapore and the many options we have after getting to our destination in Singapore.